Batman versus Predator is a comic book crossover featuring a duel between Batman and the alien from the Predator film. It was written by Dave Gibbons, with art by Andy Kubert and published by DC Comics and Dark Horse Comics in 1991. In 1995, a sequel was published called Batman versus Predator II: Bloodmatch. It was written by Doug Moench, with art by Paul Gulacy and Terry Austin. In this book, Batman gets help from Huntress in taking down the Predator. A third series, Batman versus Predator III: Blood Ties was published in 1997. Written by Chuck Dixon, the story featured a father-son Predator duo taking on Batman and Robin. Mr. Freeze is the only Batman super-villain to have appeared in a Batman versus Predator story in this comic book, though Catwoman makes a brief cameo, and The Joker is mentioned. With this drawing I wanted to give my own interpretation of 2 characters. Of course takes place at night with a big full moon. I love drawing the moon. I hope to have captured the spirit of battle. 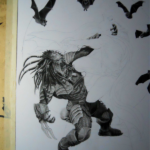 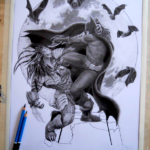