Lynn Michaels is a fictional vigilante, and ally of the Marvel Comics antihero the Punisher. She was created by Chuck Dixon and John Romita, Jr. Lynn was a cop with the NYPD until she became irritated with the department’s corruption and inability to bring in a serial rapist. She attempted to capture him herself by posing as bait, but the Punisher stepped in and, in a strange turn of events, the rapist escaped. Later, she teamed up with him to take down the rapist. Sometimes she had some deep feelings for Frank, but, after reading his War Journal, she becomes disappointed and deeply hurt, and later burns it, because she isn’t mentioned and decides to disappear from his life. At some point, she joined S.H.I.E.L.D. as a deep cover operative. Although I don’t like weapons, i’m very attracted by the pin-up girls with heavy weapons. 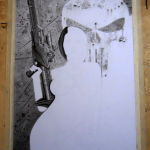 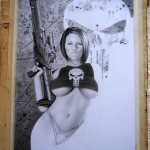 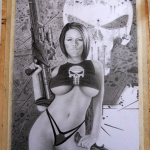