This is the second drawing of Vampirella i do. I found her very sensual. Vampirella is a fictional character, a comic book vampire superheroine created by Forrest J Ackerman and comic book artist Trina Robbins in Warren Publishing’s black-and-white horror comics magazine Vampirella  (Sept. 1969). Writer-editor Archie Goodwin later developed the character from horror-story hostess, in which capacity she remained through issue  (Nov. 1970), to a horror-drama leading character. Vampirella was ranked 35th in Comics Buyer’s Guide’s “100 Sexiest Women in Comics” list. The heroine is a vampire, since she is the daughter of Lilith and needs blood to survive and has many of the typical vampiric powers, including superhuman physical abilities, shapeshifting into a bat, immortality, and a mesmeric stare. She is not prone to the race’s traditional weaknesses, such as daylight, holy water, garlic, or crosses. She does not attack people to drink their blood, except occasionally when she herself is attacked or desires to kill. She is almost always scantily clad in her signature red sling suit with a white collar and wearing shiny black knee-high boots. I grew up watching horror movies and reading comics. In Italy in the early 70s there were many erotic comics, but nobody has ever come close to the sensuality of  Vampirella. 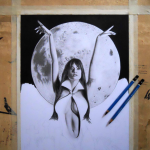 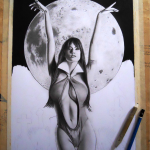 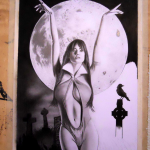