Bettie Mae Page (April 22, 1923 – December 11, 2008) was an American model who gained a significant profile in the 1950s for her pin-up photos. Often referred to as the “Queen of Pinups”, her jet-black hair, blue eyes, and trademark fringe have influenced artists for generations. A native of Nashville, Tennessee, Page lived in California in her early adult years before moving to New York City to pursue work as an actress. There, she began to find work as a pin-up model, and posed for dozens of photographers throughout the 1950s. Page was “Miss January 1955”, one of the earliest Playmates of the Month for Playboy magazine. “I think that she was a remarkable lady, an iconic figure in pop culture who influenced sexuality, taste in fashion, someone who had a tremendous impact on our society,” said Playboy founder Hugh Hefner to the Associated Press in 2008. In 1949, Page moved to New York City, where she hoped to find work as an actress. In the meantime, she supported herself by working as a secretary overlooking Rockefeller Center. In 1950, while walking alone along the Coney Island shore, Bettie met NYPD Officer Jerry Tibbs, who was an avid photographer, and he gave Bettie his card. He suggested she’d make a good pin-up model, and in exchange for allowing him to photograph her, he’d help make up her first pin-up portfolio, free of charge. It was Officer Tibbs who suggested to Bettie that she style her hair with bangs in front, to keep light from reflecting off her high forehead when being photographed. Bangs soon became an integral part of her distinctive look. In 1959, Page converted to evangelical Christianity and worked for Billy Graham, studying at Bible colleges in Los Angeles and Portland, Oregon, with the intent of becoming a missionary. The latter part of Page’s life was marked by depression, violent mood swings, and several years in a state psychiatric hospital suffering from paranoid schizophrenia. After years of obscurity, she experienced a resurgence of popularity in the 1980s. 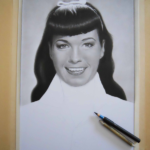 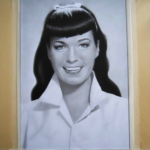