Dylan Dog is a fictional character, the protagonist of the horror comic book Dylan Dog, published by Sergio Bonelli Editore is constructed from Tiziano Sclavi. His name was taken up by the poet Dylan Thomas, and was the name that Tiziano Sclavi gave provisionally to each of its character in the early stages of their realization. In this case, the name remained. Likenesses of Dylan Dog (made by Claudio Villa is designed for the first time by Angelo Stano) are inspired by the actor Rupert Everett to request the same Sclavi and the setting is the typical gothic decadent in London, where the protagonist lives at number 7 of Craven Road. Doing live Dylan in this particular road, Sclavi intended pay homage to Wes Craven. In London there are two ways with this name due both to historical characters. The Craven Road more central is located in Westminster and the number 7 there is a hotel whose input port recalls that of the house of Dylan. Just next door there is a cafe, among others, offers a menu ‘Dylan Dog’. As stated by himself on page 71 of the comic book number 250, Dylan is high 185 cm. Dylan as always in the same way, with red shirt, black jacket, Levi jeans and shoes Clarks. Even during the bad season never leads neither coat nor umbrella. Dylan Dog is abstemious after having had a past by alcoholism, do not smoke and is a vegetarian like me. Dylan has little interest in the many aspects of modern life. Does Not like mobile phones and to keep your calendar relies on goose and fountain. In the free time he plays the clarinet, even if the single piece that is able to play is The Devil’s Trill in Sol minor by Tartini but are not truly capable of. Groucho is the assistant of Dylan. The character, of which even Dylan knows the true name, looks like the comedian Groucho Marx (which is why Dylan chooses to call it their own Groucho, from their second meeting), from which it takes numerous keystrokes. Although often treated badly by Dylan (many times threatened to dismiss him) has for him a boundless affection and at the bottom will treat it as a sort of brother. Bloch (whose physical appearance is a citation of the actor Robert Morley and whose last name is probably a tribute to the writer Robert Bloch) and the chief inspector of Scotland Yard and Dylan was in youth one of his best agents. Between the two the relationship is very close to that between the father and the son. I’m a fan of the comics who collected since 1986. This drawing is my personal tribute to this beautiful comic book. 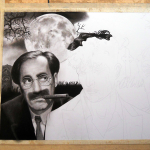 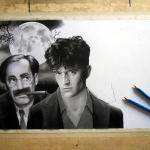 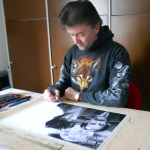 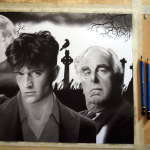