Jamie Lee Curtis (born November 22, 1958) is an American actress and author. Although she was initially known as a “scream queen” because of her starring roles in several horror films early in her career, such as Halloween, The Fog, Prom Night, and Terror Train. I’m a big fan of horror movies, especially those of the 70s and 80s. I think John Carpenter’s Halloween, is one of the best horror movies of all time. Everyone remembers the serial killer Michael Myers, but all the other actors are put into the background. With this work I wanted to pay tribute to Jamie Lee Curtis, the actress who plays Laurie Strode in some movies in the series. 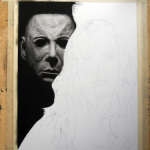 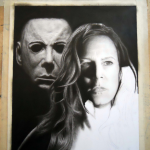 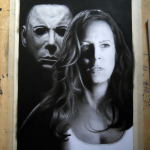