2 Broke Girls is an American television sitcom created for Warner Bros. Television. The series is set in the Williamsburg neighborhood of the New York City borough of Brooklyn. Its plot line follows the misadventures of the roommates Max Black (Kat Dennings) and Caroline Channing (Beth Behrs), who are both poor, and their efforts to start a cupcake business.  The two work together at a Brooklyn diner, soon becoming roommates and friends while building toward their dream of one day opening a cupcake shop. Among those working with them at the restaurant are their Korean boss, Han Lee (Matthew Moy); Oleg (Jonathan Kite), an upbeat but perverted Ukrainian cook; and Earl (Garrett Morris), a 75-year-old African American cashier. Also featured starting late in the first season is their neighbour and part-time boss Sophie (Jennifer Coolidge), a Polish immigrant who runs the house-cleaning company Sophie’s Choice. I think 2 broke girls is one of the funniest series I’ve ever seen. I really enjoyed drawing the two protagonists. if you like, take a look at the television series, i can guarantee you that is a hoot! 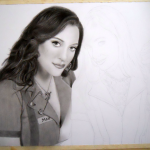 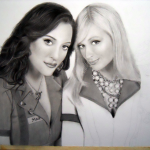