This is a tribute to the movie series Hellraiser. Hellraiser (also known as Clive Barker’s Hellraiser) is a 1987 British horror film written and directed by Clive Barker, based upon his own novella The Hellbound Heart. The film spawned a series of sequels. The book describes a group of sadomasochistic entities called Cenobites, who live in an extradimensional realm, where they perform “experiments” in extreme sexual experiences. They can only obtain access to Earth through an ornately designed puzzle box called the Lemarchand Configuration (called the “Lament Configuration” in the later movie), which opens a dimensional schism. The lead Cenobite called Pinhead is played by Douglas William Bradley an English actor. The Chatterer Cenobite is played by German actor Nicholas Vince and finally the female Cenobite is played by Canadian actress Barbie Wild. When Hellraiser came out in theaters was a real visual shock and I was very impressed. I hope that my drawing impressions too. 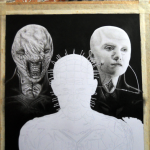 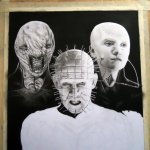 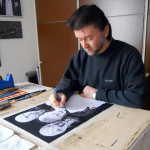 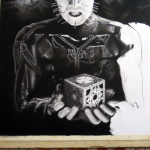