This is another work where the protagonists are cats. I thought I’d add a beautiful actress who I love very much: Scarlett Johansson. Scarlet was born in Manhattan, in New York City. Her father, Karsten Johansson, is an architect originally from Copenhagen, Denmark, and her paternal grandfather, Ejner Johansson, was an art historian, screenwriter, and director. Her mother, Melanie Sloan, a producer, comes from an Ashkenazi Jewish family from the Bronx. Johansson began acting during childhood, after her mother started taking her to auditions. She would audition for commercials but took rejection so hard her mother began limiting her to film tryouts. She made her film debut at the age of nine, as John Ritter‘s daughter in the fantasy comedy North (1994). Johansson made the transition from teen roles to adult roles, with two roles in 2003. In the Sofia Coppola film Lost in Translation and in Peter Webber’s Girl with a Pearl Earring (2003). After having acted in several other movies, in march 2009, Johansson signed on to play Natasha Romanoff, aka “The Black Widow” in Iron Man 2. Johansson reprised the role of Natasha Romanoff in The Avengers (2012). The Avengers received positive reviews and was highly successful at the box office, becoming the third highest-grossing film both in the United States and worldwide. Johansson again played Black Widow in the sequel Captain America: The Winter Soldier (2014) and  Avengers: Age of Ultron, alongside the original cast of the first Avengers film.  A mixture of close-ups, concealing costumes, stunt doubles and visual effects were used to help hide Johansson’s pregnancy during filming. I think this painting came well and who knows if Scarlett will appreciate it. 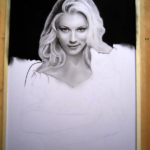 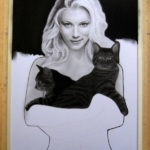 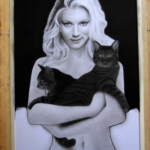