Maila Nurmi (December 11, 1922 – January 10, 2008) was a Finnish-American actress born in Petsamo, Finland, who created the campy 1950s character Vampira. She portrayed Vampira as TV’s first horror host and in the Ed Wood cult film Plan 9 from Outer Space. She is also billed as Vampira in the 1959 movie The Beat Generation where she plays a beatnik poet. The idea for the Vampira character was born in 1953 when Nurmi attended choreographer Lester Horton’s annual Bal Caribe Masquerade in a costume inspired by Morticia Addams in The New Yorker cartoons of Charles Addams. Her appearance with pale white skin and tight black dress caught the attention of television producer Hunt Stromberg, Jr. (1923–86), who wanted to hire her to host horror movies on the Los Angeles television station KABC-TV, but Stromberg had no idea how to contact her. He finally got her phone number from Rudi Gernreich, later famed as the designer of the topless swimsuit. The name Vampira was the invention of Nurmi’s husband, Dean Riesner. Nurmi’s characterization was influenced by the Dragon Lady from the comic strip Terry and the Pirates and the evil queen from Disney’s Snow White and the Seven Dwarfs. I love the dark ladies. 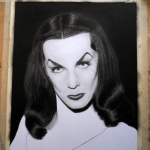 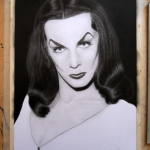 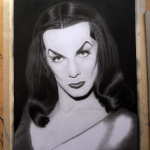