Neve Adrianne Campbell (born October 3, 1973) is a Canadian actress. Her first starring role was as Daisy in the Canadian youth series Catwalk, (1992–1994). She made several guest appearances on shows such as The Kids In The Hall, Are You Afraid of the Dark? and Kung Fu: The Legend Continues. Described as “television’s most believable teenager”, Campbell rose to fame in United States outside Canada after playing Julia Salinger in the American drama series Party of Five, (1994–2000). The show won the Golden Globe Award for Best Drama in 1996. Campbell’s first widely released film was The Craft (1996). She starred as Sidney Prescott in Scream (1996), which was a huge success and winning critical acclaim. Her role has received significant critical praise throughout the Scream series, earning her the Saturn Award for Best Actress for her role in Scream. The film was followed by three sequels, all of which were also successful, with Scream 2 (1997), Scream 3 (2000). In 2011, Campbell reprised her role as Sidney Prescott in the horror film Scream 4. Neve Campbell is one of my favorite actresses and this drawing is a tribute to her skill. 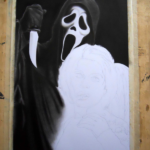 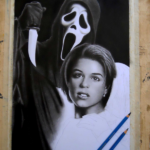 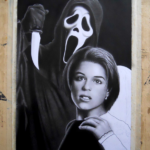