Wesley Earl “Wes” Craven (August 2, 1939 – August 30, 2015) was an American film director, writer, producer and actor, known for his pioneering work in the genre of horror films, particularly slasher films, where his impact on the genre was considered prolific and influential. Due to the success and cultural impact of his works in the horror film genre Craven has been called the “Master of Horror”. Craven’s first feature film as director was The Last House on the Left, which was released in 1972. He is best known for creating the A Nightmare on Elm Street franchise featuring the Freddy Krueger character, directing the first installment and Wes Craven’s New Nightmare, and co-writing A Nightmare on Elm Street 3: Dream Warriors. Craven also directed all four films in the Scream series and two films in the Hills Have Eyes series. Some of his other films include The Last House on the Left, The People Under the Stairs, Red Eye, The Serpent and the Rainbow, and Vampire in Brooklyn. In Scream, the characters frequently reference horror films similar to their situations, and at one point Billy Loomis tells his girlfriend that life is just a big movie. This concept was emphasized in the sequels, as copycat stalkers reenact the events of a new film about the Woodsboro killings (Woodsboro being the fictional town where Scream is set) occurring in Scream. The last film that he directed before his death was Scream 4. Wes Craven is one of my favorite directors and with this drawing I wanted to pay tribute to his talent. Behind him I drew the main characters of the film that made him famous. Rest in peace, Wes, you will remain forever in my heart. 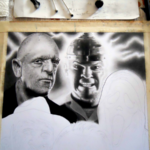 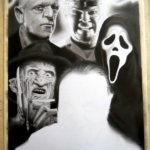 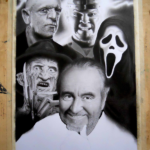