Noomi Rapace ( born 28 December 1979) is a Swedish actress. She achieved international fame with her portrayal of Lisbeth Salander in the Swedish film adaptations of the Millennium series: The Girl with the Dragon Tattoo, The Girl Who Played with Fire, and The Girl Who Kicked the Hornets’ Nest. At the age of seven, Rapace was given her first film role, which was a non-speaking part in the film Í skugga hrafnsins by Hrafn Gunnlaugsson. This experience made her decide to be an actress.  She left home at age 15 and enrolled in a Stockholm theatre school. Her international fame has earned her leading roles in American cinema. She was cast in Ridley Scott’s blockbuster hit Prometheus, where she played the leading role, a scientist named Elizabeth Shaw. She had met Scott for the first time following the release of the Millennium trilogy movies, at which point he expressed a willingness to work with her and encouraged her to improve her accent. Prometheus was released in June 2012. After reading the trilogy of books by  Stieg Larsson and have seen the Swedish movie version, I could not help but draw the protagonist, the Swedish actress Noomi Rapace. His interpretation of the hacker Lisbeth Salander is extraordinary. 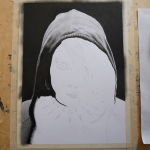 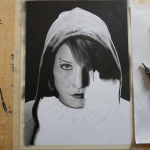