Rutger Oelsen Hauer born 23 January 1944) is a Dutch actor and writer. His career began in 1969 with the title role in the popular Dutch television series Floris. Hauer was born in Breukelen in the Netherlands, the son of drama teachers Arend and Teunke. Hauer grew up in Amsterdam. Since his parents were very occupied with their careers, he and his three sisters (one older, two younger) were brought up mostly by nannies. At the age of 15, Hauer ran off to sea and spent a year scrubbing decks aboard a freighter. Returning home, he worked as an electrician and a joiner for three years while attending acting classes at night school. Hauer joined an experimental troupe, with which he remained for five years before Paul Verhoeven cast him in the lead role of the successful 1969 television series Floris, a Dutch medieval action drama. The role made him famous in his native country, and Hauer reprised his role for the 1975 German remake Floris von Rosemund. Hauer made his American debut in the Sylvester Stallone film Nighthawks (1981) as a psychopathic and cold blooded terrorist named Wulfgar. The following year, he appeared in arguably his most famous and acclaimed role as the eccentric and violent but sympathetic anti-hero Roy Batty in Ridley Scott’s 1982 science fiction thriller Blade Runner, in which role he improvised the famous tears in rain soliloquy. His monologue at the end of the film is entered in the history of cinema. “I’ve seen things you people would not believe, attack ships on fire off the shoulder of Orion,  i watched c-beams glitter in the dark near the Tannhauser Gates. All Those moments will be lost in time, like tears in rain . Time to Die. “ 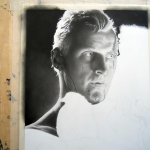 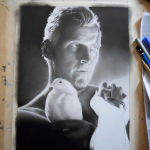