Simon Baker (born 30 July 1969) is an Australian actor and director. In his television acting career, he is known for his lead roles in the CBS television series The Mentalist (as Patrick Jane) and The Guardian (as Nicholas Fallin). In his film acting career, he is best known for his roles as Max Rourke in the remake of the Japanese horror film The Ring Two, Riley Denbo in Land of the Dead and Christian Thompson in the film adaptation of The Devil Wears Prada. In 1997, Baker starred as Matt Reynolds in L.A. Confidential. He grew up in New South Wales, Australia. On October 2, 1998, Baker married Australian actress Rebecca Rigg after five years of living together. They have three children, two sons and a daughter. On 14 February 2013, Baker was honoured with a star on the Hollywood Walk of Fame for his contributions to the entertainment industry. Baker’s star can be found at 6352 Hollywood Blvd. Baker was selected by the French perfume house Givenchy to be the face of the Fragrance “Gentlemen Only”. In it Baker walks down a pavement in pouring rain, whilst carrying an umbrella. The spot released 11 March 2013 also exists in a 33-second version and reached a strong YouTube audience. Baker also featured in an 18-month ad campaign for ANZ Bank in Australia and New Zealand starting in 2012. Since 2012, he has been a Longines Ambassador of Elegance and featured in “Elegance is an attitude” advertising campaign which was shot in Chantilly Racecourse as well as their magazine print campaign for the same slogan shot by Le Studio Production SA. Baker fronted Samsung Electronics Australia’s “Turn on Tomorrow” campaign featuring as announced in July 2010. In my personal opinion, Simon Baker is one of best actor I know and this portrait is my personal homage to him. I hope you like it. 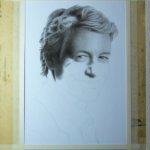 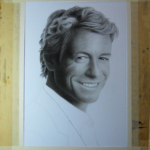