Stephen Edwin King (born September 21, 1947) is an American author of contemporary horror, suspense, science fiction, and fantasy. His books have sold more than 350 million copies and many of them have been adapted into feature films, television movies and comic books. King has published fifty novels, including seven under the pen name Richard Bachman, and five non-fiction books. He has written nearly two hundred short stories, most of which have been collected in nine collections of short fiction. Many of his stories are set in his home state of Maine. King attended Durham Elementary School and graduated from Lisbon Falls High School, in Lisbon Falls, Maine. He displayed an early interest in horror as an avid reader of EC’s horror comics, including Tales from the Crypt (he later paid tribute to the comics in his screenplay for Creepshow). He began writing for fun while still in school, contributing articles to Dave’s Rag, the newspaper his brother published with a mimeograph machine, and later began selling to his friends stories based on movies he had seen. From 1966, King studied English at the University of Maine, graduating in 1970 with a Bachelor of Arts in English. After leaving the university, King earned a certificate to teach high school but, unable to find a teaching post immediately, initially supplemented his laboring wage by selling short stories to men’s magazines such as Cavalier. Many of these early stories have been republished in the collection Night Shift. In 1973, King’s first novel Carrie was accepted by publishing house Doubleday. King had thrown an early draft of the novel into the trash after becoming discouraged with his progress writing about a teenage girl with psychic powers. His wife retrieved the manuscript and encouraged him to finish it. The rest is history. Stephen King is the master of contemporary horror literature. My favorite for accuracy. I grew up reading his novels and hope one day to meet him in person and tell him how much I am grateful. 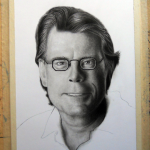 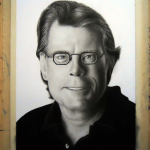