Cillian Murphy (born 25 May 1976) is an Irish actor of stage and screen. Since making his debut in his home country in the late 1990s, Murphy has also become a presence in British and American cinema, noted by critics for his performances in a wide range of roles. Murphy began his performing career as a rock musician. After turning down a record deal, he made his professional acting debut in the play Disco Pigs in 1996. While continuing with stage work he also began appearing in independent films, first coming to international attention in 2002 as the hero of Danny Boyle’s post-apocalyptic film 28 Days Later. Murphy’s profile continued to grow in 2005 when he appeared in a series of successful films: firstly as the Scarecrow in Christopher Nolan’s 2005 blockbuster Batman Begins – a role he pencils drawing, reprised in The Dark Knight (2008) and The Dark Knight Rises. Murphy often works in or near the city and has expressed no desire to move to Hollywood. He prefers not to speak about his personal life, and did not appear on any live TV chat shows. He does not have a stylist or a personal publicist, travels without an entourage, and often attends premieres alone. Shy and private, Murphy professes a lack of interest in the celebrity scene, finding the red carpet experience a challenge and not one he wants to overcome. It was very interesting to draw his eyes. 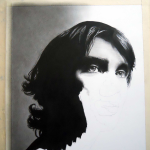 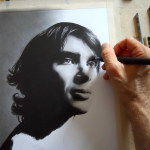