Anthony Perkins (April 4, 1932 – September 12, 1992) was an American actor and singer. He was nominated for the Academy Award for Best Supporting Actor for his second film, Friendly Persuasion, but is best known for playing Norman Bates in Alfred Hitchcock’s Psycho and its three sequels. The film was a critical and commercial success, and gained Perkins international fame for his performance as the homicidal owner of the Bates Motel. Perkins’ performance gained him the Best Actor Award from the International Board of Motion Picture Reviewers. Perkins reprised the role of Norman Bates in three sequels to Psycho. The first, Psycho II (1983), was a box office success more than 20 years after the original film. He then starred in and directed Psycho III (for which he was nominated for a Saturn Award for Best Actor) in 1986, but refused to reprise his role as Bates in the failed television pilot Bates Motel, famously boycotting the project in a very ardent, and well-received, oppositional public campaign. He did play Bates in the following made-for-cable film Psycho IV: The Beginning in 1990, over which he had much creative control, although he was turned down for director. Perkins has a star on the Hollywood Walk of Fame, an honor he received for his influential and exceptional contributions to the motion picture industry. It is located at 6801 Hollywood Boulevard in Hollywood, California. Perkins died at his Hollywood Hills home on September 12, 1992, from AIDS-related pneumonia. Maybe Norman Bates is the father of all homicidal maniacs of the big screen. 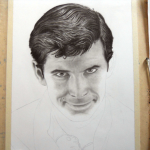 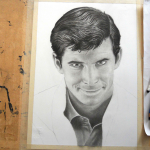