Uma Karuna Thurman (born April 29, 1970) is an American actress and model. She has performed in leading roles in a variety of films, ranging from romantic comedies and dramas to science fiction and action movies. Thurman was born in Boston, Massachusetts. Her forename Uma, Sanskrit उमा, meaning “splendour, light”, is a name of Parvati, the Hindu goddess of love and fertility. Her father, Robert Alexander Farrar Thurman, is a professor of Indo-Tibetan Buddhist Studies; an academic and writer. Her mother, Nena von Schlebrügge, was a noblewoman of Baroness virtue and a high-fashion model, discovered in Stockholm, who moved to New York at the age of 17 to join the Ford Modelling Agency. Thurman began her career as a fashion model at age 15, but she made her movie debut in 1988, appearing in four films. In 1994 Thurman auditioned for the Quentin Tarantino movie Pulp Fiction and was nominated for the Best Supporting Actress Oscar the following year. She became one of Tarantino’s favorite actresses to cast. In 2003 she played assassin Beatrix Kiddo in the Kill Bill movie, out for revenge against her former lover. Tarantino wrote the part specifically for her. He cited Thurman as his muse while writing the film, and gave her joint credit for the character, whom the two conceived on the set of Pulp Fiction from the sole image of a bride covered in blood. The film took nine months to shoot, and was filmed in five different countries. The role was also her most demanding, and she spent three months training in martial arts, swordsmanship, and Japanese. It was originally set to be released as one film. However, due to its over 4-hour running time, it was ultimately released in two parts and subsequently became a cult film  and scored highly with critics. Thurman was nominated for a Golden Globe for both entries, plus three MTV Movie Awards for Best Female Performance and two for Best Fight. I always liked warrior women. 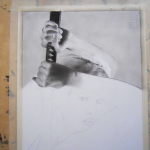 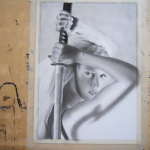 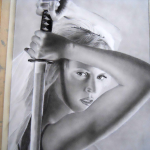