Vincent Leonard Price, Jr. (May 27, 1911 – October 25, 1993) was an American actor, well known for his distinctive voice and performances in horror films. Despite his lasting association with horror films, Price started out as a character actor. Price’s first venture into the horror genre was in the 1939 Boris Karloff film Tower of London. The following year he portrayed the title character in the film The Invisible Man Returns (a role he reprised in a vocal cameo at the end of the 1948 horror-comedy spoof Abbott and Costello Meet Frankenstein). In 1982, Price provided the narrator’s voice in Vincent, Tim Burton’s six-minute film about a young boy who flashes from reality into a fantasy where he is Vincent Price. That same year, Price performed a sinister monologue on the title track of Michael Jackson’s Thriller album. A longer version of the rap, sans the music, along with some conversation can be heard on Jackson’s 2001 remastered reissue of the Thriller album. Part of the extended version can be heard on the Thriller 25 album, released in 2008. His last significant film work was as the inventor in Tim Burton’s Edward Scissorhands (1990). 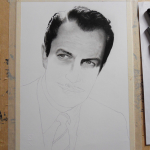 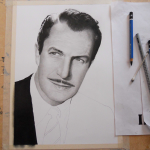